HDI as a digital travel guide

When a stand receives the German Brand Design Award, at least on the design level everything has been done right. And if the customer also claps his hands after the event because it was the most successful DKM of all time for him, then you can sit back for a moment and let the completed work pass in review 🙂

The initial situation was quite tricky both on the conceptual and content level as well as on the architectural level. Architecturally, it was because the exhibition area had the shape of a triangle, which is fundamentally a challenge due to the acute angles. 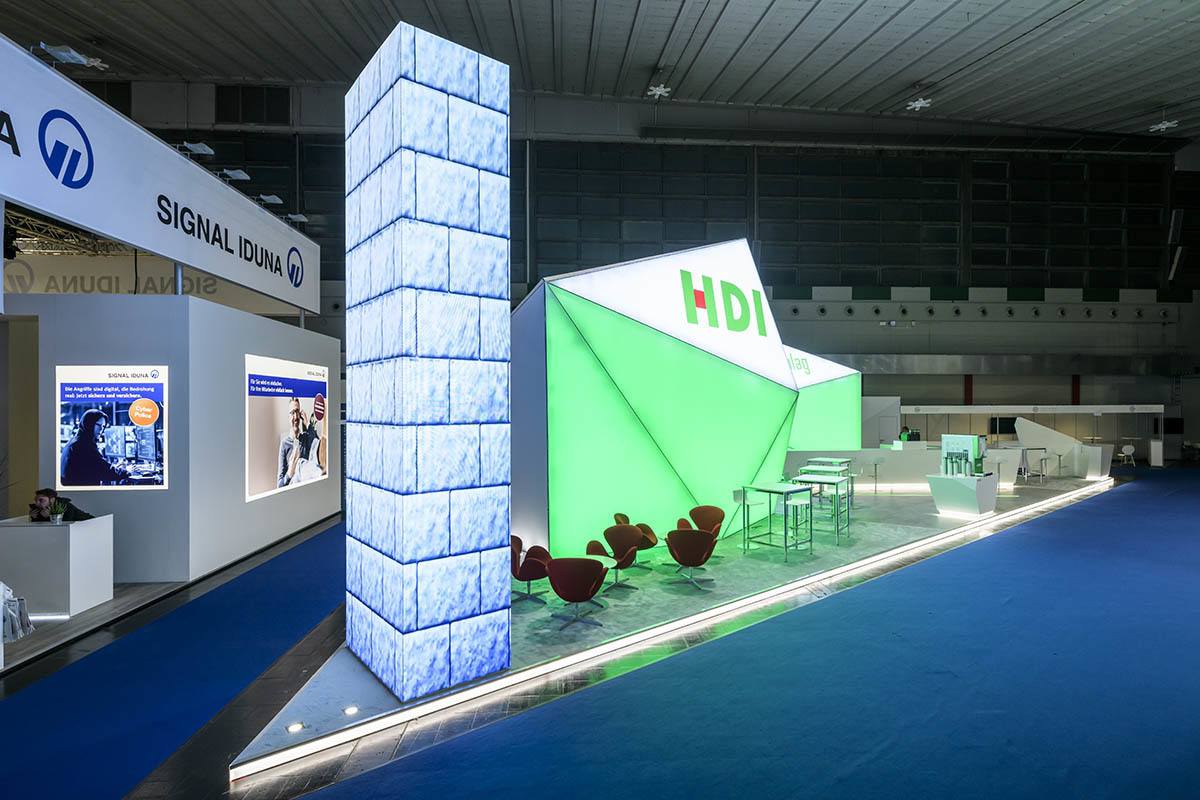 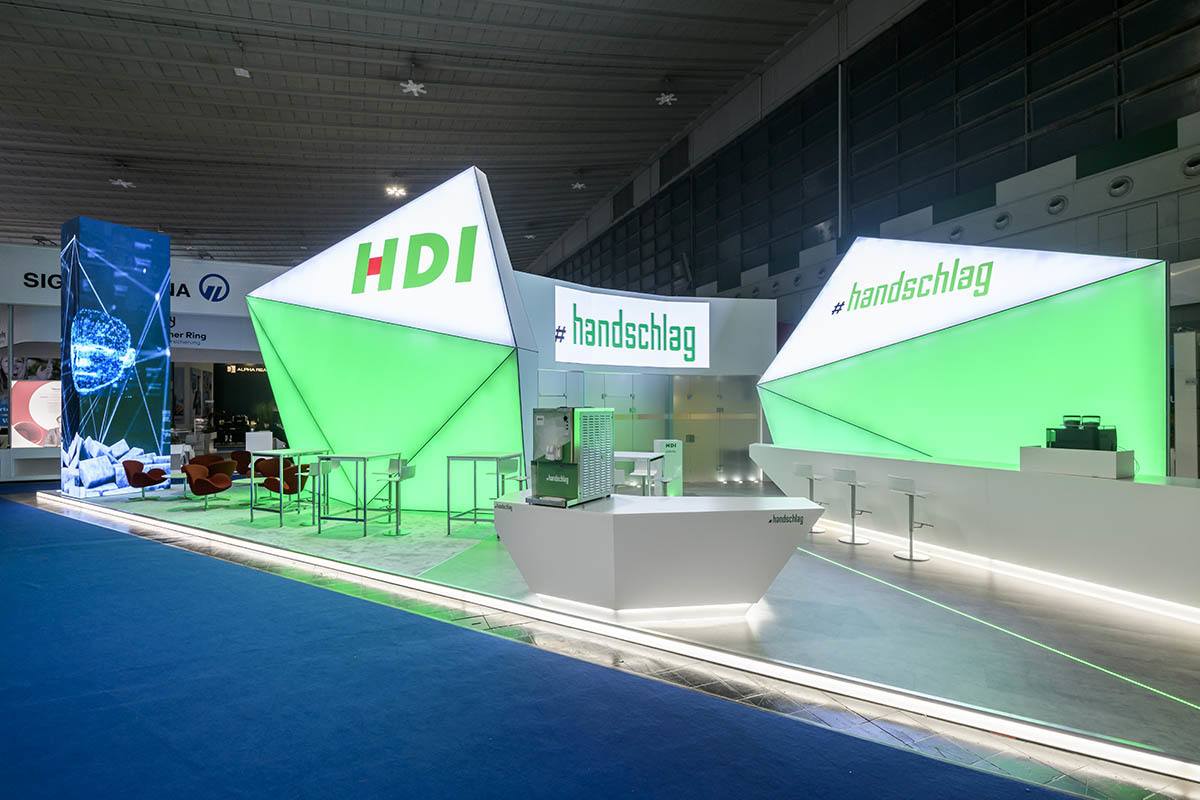 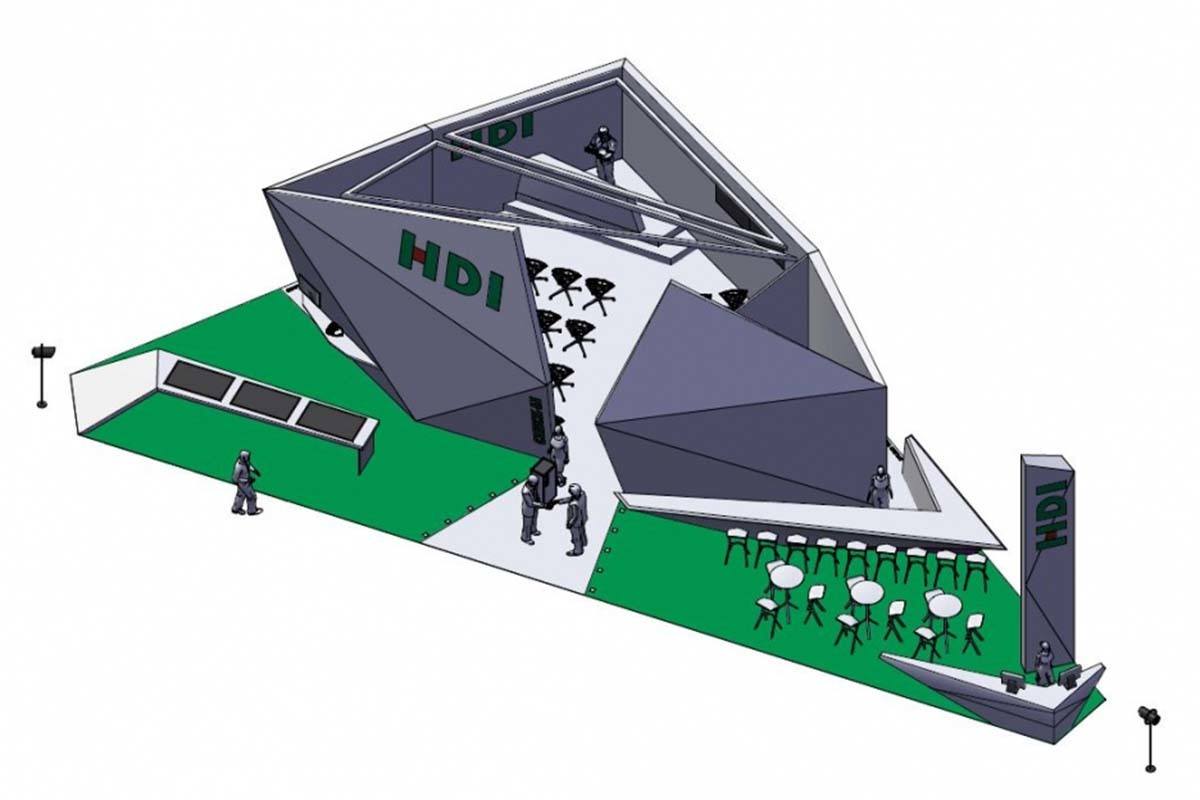 The journey into the future

In terms of content, HDI wanted to present itself as a competent and trustworthy partner to the brokers, providing them with advice and support on the subject of digitization. This made it clear that the trade fair presentation should have more than just a digital touch. No, the overall concept had to radiate maximum digital credibility: from the invitation to the trade fair to its contents and the follow-up to the trade fair.

Together with the agency alt//cramer, the idea of a “journey into the future” was born: HDI as digital pilot and travel guide defines the route on the way to digitization, the setting a virtual airport on the exhibition stand, visible with specially designed VR glasses. 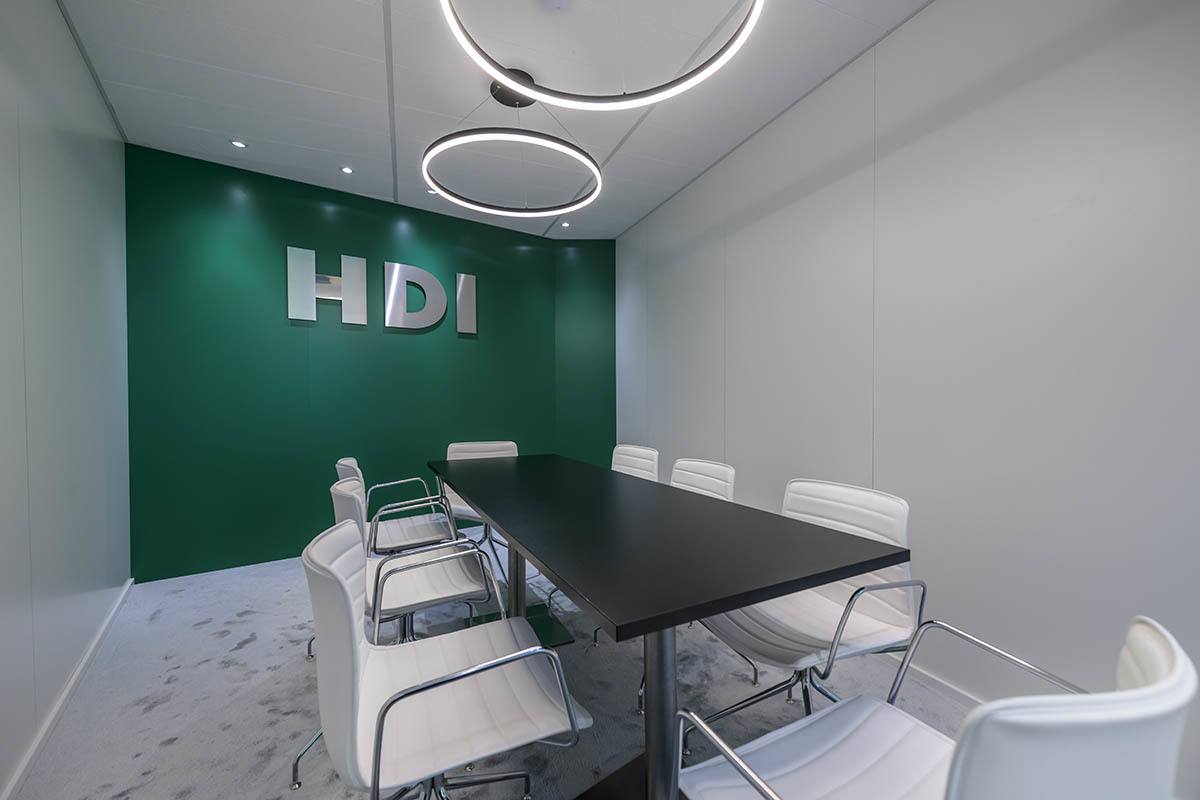 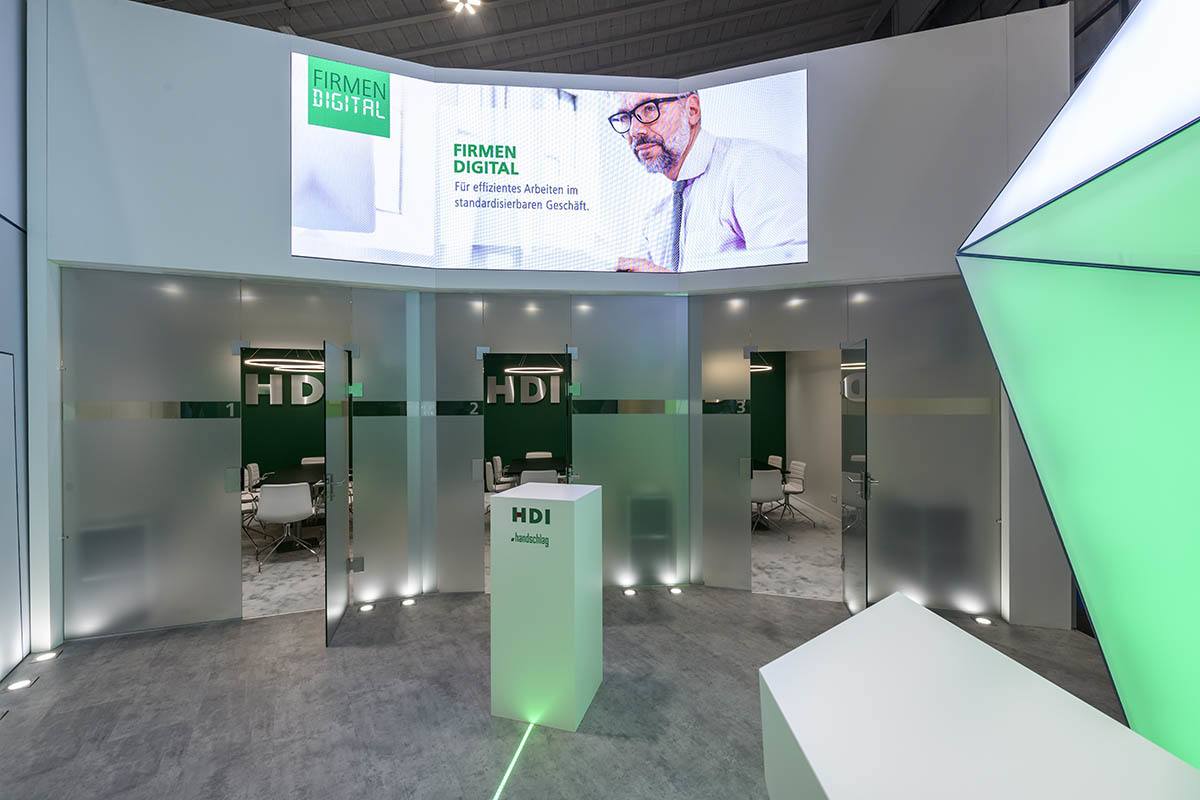 Digital from A to Z: #handshake

The invitation to the trade fair was sent out as an HTML mailing, in which lecture topics on digitisation could be booked during the trade fair. As confirmation the broker received a digital boarding pass. He received a push notification on his smartphone at the trade fair shortly before his presentations. But that was only one side of the coin. On the other hand, HDI was able to track who of the invited brokers had registered for which lectures via a website.

As an overarching element, a hash tag was a red thread running through the entire trade fair presentation: #handschlag (which means handshake in german). The Hashtag itself stands for digitization. With Twitter and other social networks, messages can be sorted thematically and bring orientation to the networks.

The same applies to Hashtag #handschlag. HDI helps and supports digitization. Put your hand on it! This is how the good old handshake, which was regarded as the seal of an agreement between honorary people, finds its way into the digital world. The Hashtag clearly expresses what HDI wants: to unite the best of the online and offline world. 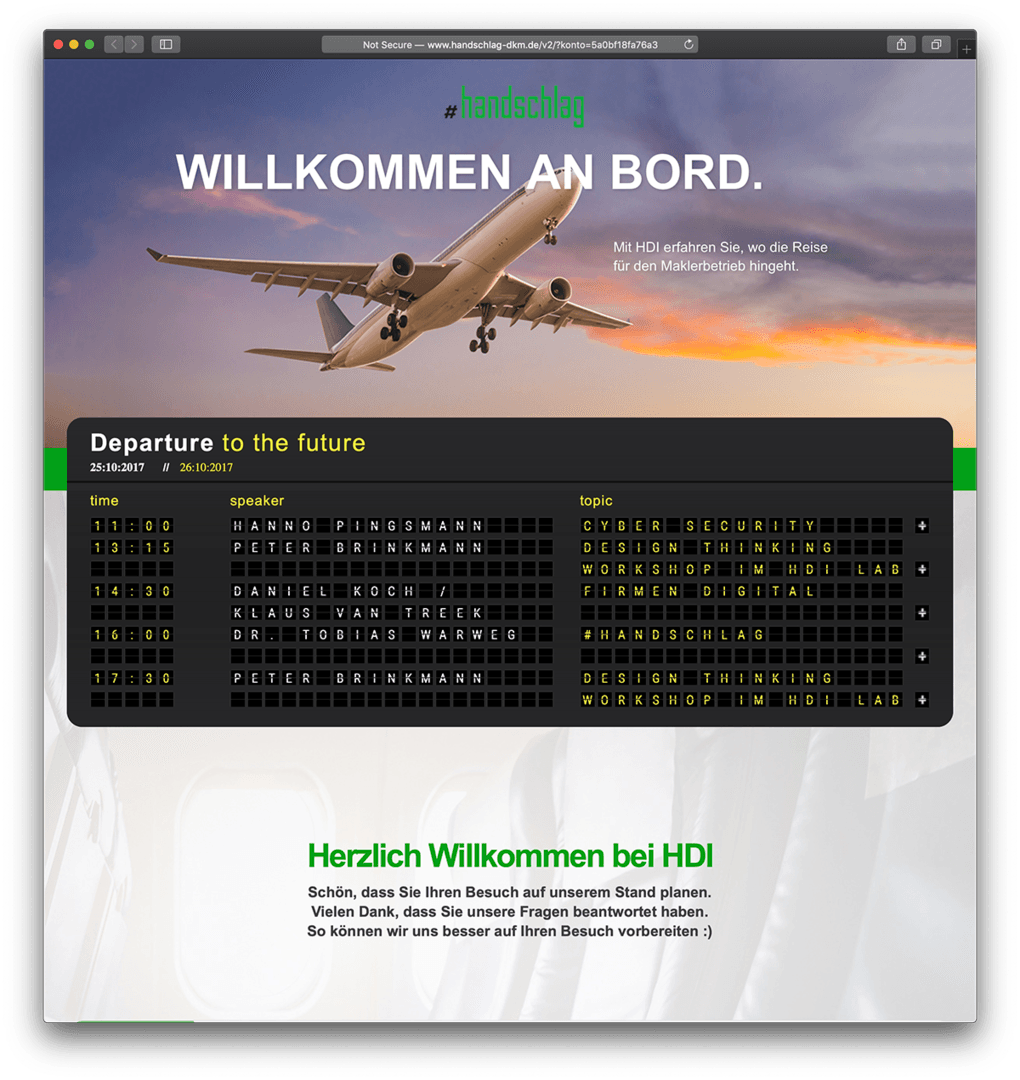 A diamond as an eye-catcher

Lecture and meeting rooms were placed in the center of the exhibition area. Only visitors with a digital boarding pass had access to the room. On the outside, this area had the shape of an oversized diamond in the HDI colors. It was the eye-catcher at the entire DKM.

In the outside area of the diamond, visitors could put together personal information packages on interactive touch screens or have a coffee in the service area. At the corner points of the triangular stand area, a playful gimmick with the help of HoloLens eyeglasses provided a glimpse of the “mixed reality” of the exhibition stand and virtual airport.

The fact that this trade fair stand was able to convince the jury of the German Brand Award with this concept and voted the winner of “Brand Creation – Brand Experience, Fairs & Exhibition” was the crowning glory of a great project.

We use cookies on this site to analyze traffic and optimize your experience. Datenschutzerklärung ansehen.